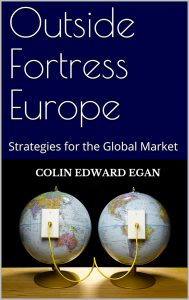 It was posted on 4th February 2020, the fourth day of the new European post-Brexit order and it reflected upon keynote speeches from UK Prime Minister Boris Johnson and the European Commission’s chief negotiator Michel Barnier. Both leaders were presenting their respective ‘transition roadmaps’ towards the Brexit endgame scheduled for completion by 31st December 2020.

The core elements of this essay on international trade were originally scheduled for posting on 30th March 2019, the intended date of the UK’s first day of social, cultural and economic life ‘beyond Brexit’.

In the beginning, approximately 5,300 years ago…

In 1991 hikers in the Austrian Ötztal Alps discovered a mummified body protruding from a melting glacier. Archaeologists dated the frozen remains as being 5,300 years old and gave him the nickname Ötzi, ‘the Iceman’. They were able to demonstrate that he was travelling between two locations and to contend with confidence that he was moving with the purpose of exchanging goods, one community to another. International trade, if not born, or ‘free’ (who knows?), is proven.

Introduction: why trade at all?

In his February 2020 speech laying down the foundations of the United Kingdom’s position in the post-Brexit transition trade negotiations with the EU, Prime Minister Boris Johnson referred to a philosophy that had its origins in 18th and 19th Century political economy with the publication of Adam Smith’s seminal five-book treatise on market economics and free trade: An Inquiry into the Nature and Causes of the Wealth of Nations (Smith, 1776), concepts subsequently developed with far greater explanatory power by David Ricardo (2018) in his 1817 seminal text, On the Principles of Political Economy: And Taxation.

In the Wealth of Nations, Adam Smith observed that a nation can maximise its economic prosperity by specializing in the production of goods where it has an absolute advantage over other countries and exchanging these for goods from other countries with which it is disadvantaged, resource-wise.

No discussion of international trade is complete without introducing the Ricardian law of comparative advantage, which Boris Johnson did in his opening remarks. Ricardo’s fundamental argument was equally in favour of free trade between nations but he also demonstrated that, under most conditions, a country would still benefit from trade even if it had an absolute advantage in every product category over that of another country.

Unsurprisingly, Ricardo was a fierce opponent of protectionism and the ‘talking points’ of his day resonate loudly 200 years on, with President Trump’s tweets using the same language on trade wars as those leading up to the repeal of the British Corn Laws in 1846, particularly amongst those factions opposing and/or fearing its progressive impact.

Both Smith and Ricardo were vehemently opposed to the predominant trade mechanism of their times, mercantilism, which was based upon state-backed encouragement of exporting goods matched with the imposition of punitive tariffs to stifle imports, this supported by warships and the implicit and/or real threat of hostility (aka gunboat diplomacy). Mr Johnson also alluded to this mode of international trade in his speech, a subtle sideswipe at Donald Trump’s ‘America First’ trade policy verbosity and increasingly random behaviours in this regard.

In his speech on the same day as that given by Johnson, Michel Barnier, the European Commission’s Head of Task Force for Relations with the United Kingdom, spoke in the same universal vocabulary of international trade relations as he presented the platform for the EU’s transition roadmap.

Both Johnson and Barnier were speaking in the language of ‘macroeconomics’, the lexicon of choice amongst politicians when discussing the business of business in the context of trade negotiations. Translating this in a meaningful way to the real world of markets, companies and management has proved elusive during the Brexit hiatus, leaving a potentially dangerous knowledge vacuum for British businesses, especially those in the small and medium-sized sector for whom this vocabulary fails to translate in any meaningful, practical way.

Following the ‘In-Out’ Brexit referendum of June 2016, there seemed to be a ‘wait and see’ attitude amongst many businesses as the political process for implementing Brexit following delivery of the essential Article 50 notification to Brussels meandered along its long and winding road to who knew where. Or when. Or how. Or if. A land of confusion…

But regardless of political contrivances and controversies, ‘waiting and seeing is not a good platform upon which to build a long-term effective and efficient global business strategy for any organization, regardless of country-of-origin, business sector or company size. Companies should be preparing now for exploiting the opportunities which international business developments might bring as new trade deals are struck, while at the same time building barriers against the looming threats from an uncertain and nervy customs relationship with the EU following the post-Brexit transition period.

There will be one: hard, soft or, most likely, fudgy. And British companies pursuing purely domestic business strategies should bolster themselves for the fierce competitive winds that those newly negotiated international trade agreements will bring to the UK market: after all, ‘free trade’ is a two-way street.

Speaking on Sky News ahead of Prime Minister’s Questions in February 2019, Chris Philp, a Conservative MP and former member of the Treasury Select Committee, made the following comment with reference to the ongoing Brexit drama:

… don’t forget the vast majority of UK businesses actually, you know, don’t do exports so we’re talking about just those businesses which do export …

While he was cut-off mid-sentence (hence the quote is potentially taken out of context) this notion that companies who don’t export needn’t worry about leaving the comfort blanket of the European trade bloc has been a recurring theme throughout the repeatedly prolonged Brexit discussions and debate, primarily amongst those in favour of leaving the EU. And it is a hugely naive and dangerous narrative, regardless of the political stance or remain/leave perspective taken by those saying and/or referencing it.

As international trade talks proceed, entrepreneurial Chinese, Taiwanese, Indian, European and even Russian companies are drooling at the prospect of ‘unfettered access’ to the UK market. I know this because I’ve personally taught Masters-level international marketing courses to managers of these firms at the Hong Kong University of Science and Technology (HKUST); Skolkovo: Moscow School of Management, Russia; Erasmus University, the Netherlands; and Warwick University in the UK. The last-named academic institution is not a mistake in this context. The most recent course I taught there, the MSc elective Global Business Strategy, had 105 participants: 75 were either from India or China, each with a one-year student visa and return airline tickets.

As we are constantly reminded, the education of foreign nationals in the UK constitutes a significant export out of it. But the outflow is not just earnings, it is also knowledge, in this case, management science. This phenomenon of ‘exporting knowledge’ is not new in recent international business history. During the 1990s, for example,  over 25% of doctoral students studying electronics in American university PhD programmes were from Taiwan or China and, on graduation, they took their newly-learned skills home to drive their countries’ export programmes (e.g. Taiwanese company Foxconn, Chinese company Huawei). These so-called returnees returned with a vengeance, as the current US-China ‘trade wars’ and the ongoing Huawei ‘internet of things’ spy spectacle reveal.

Closer to home, the threat to those British SMEs pursuing purely domestic business strategies (i.e. wholly dependent upon the UK economy) is huge as free trade deals loom large; and seemingly soon. The danger is heightened by a sharp reduction in non-tariff barriers to UK market access, most notably distribution, historically described as a ‘structural impediment’ to international trade. Consider the following observation from the CEO of e-commerce giant Alibaba, Jackie Ma:

e-commerce is not for big companies or developed countries. It’s for developing countries, young people and small businesses. We should not let world global trade be controlled by 60,000 big companies. We should make technologies and policies to encourage six million, 16 million or 60 million businesses. Alibaba will make it happen.

Alibaba is a Chinese company.

On a more positive note, the global internet infrastructure has opened tremendous opportunities for smaller companies from any country to access global markets from which they were excluded in the past, facilitated by ‘new economy’ companies creating their own global, virtual marketplaces, including Alibaba, Amazon, e-Bay, Etsy and Facebook.

Now that the Brexit arrangement has been ratified and as the transition discussions progress, the benefits to all parties of fair free trade should frame the negotiations. But there also needs to be a step-change shift amongst politicians and commentators away from the often opaque and impenetrable language of macroeconomics towards the key ‘microeconomic’  arenas of competitive markets and company strategies. Simply stated, front-line issues of international trade relate directly to the ‘Three Cs’ of competitive markets: Customers; Competitors; Capabilities. Success under these conditions, global and/or domestic, will ultimately be determined by addressing the following five key business strategy ‘themes’:

A case for optimism…

Much is made of the impact of social media being excessively negative and there does seem to be an air of doom and gloom if one is foolish enough to get sucked into its sticky entrails or become hooked on 24/7 rolling news channels and excessively buzzy newsfeeds: they have to say something and bad news sells. Much of the print media are desperate and with good reason. Even ‘quality’ newspapers are being seduced by the seductive powers of ‘clickbait’ in their online presence.

Despite the vitriol to be found in the comments section of otherwise reasonably well-balanced journalism and the rampant trolling found in social media more generally, there is a case to be made for optimism.

The philosophy of the Outside Fortress Europe project is based on objective analysis, robust critique and positive insights for the effective design and implementation of competitive global and domestic business strategies.

In the current climate of looming trade wars and the ongoing EU/Brexit transition drama, the business mood is dark. But for many reasons and on many fronts, opportunities abound for positive personal and organizational development. This is the conclusion drawn in the Epilogue of Outside Fortress Europe: Strategies for the Global Market which opens with a quotation from the Victorian philosopher and philanthropist John Ruskin (1819-1900):

Sunshine is delicious, rain is refreshing, wind braces us up, snow is exhilarating; there is really no such thing as bad weather, only different kinds of good weather.

Our glass is half-full…

Starting with the Preface to Outside Fortress Europe: Strategies for the Global Market we have introduced and discussed the seminal, prescient work of Adam Smith and without doubt his Wealth of Nations treatise can be seen as the blueprint for capitalism. Perhaps the strongest critique made of his philosophy has related to its emphasis on the ‘self-interest’ motivation of individual actors which was at its core. But, as renowned psychology professor Stephen Pinker has observed:

Smith was not saying that people are ruthlessly selfish, or that they ought to be; he was one of history’s keenest commentators on human sympathy. He only said that in a market, whatever tendency people have to care for their families and themselves can work to the good of all. Exchange can make an entire society not just richer but nicer, because in an effective market it is cheaper to buy things than to steal them, and other people are more valuable to you alive than dead.

This sounds like a reasonable post-Brexit philosophy for the relationship between the UK and the remaining members of its partner in divorce, the EU. Only time will tell and only a fool would tell you otherwise.

Pinker, S. (2018). Enlightenment Now: The Case for Reason, Science, Humanism and Progress. London: Viking.
Ricardo, D. (2018). On the Principles of Political Economy: And Taxation (Classic Reprint). London: Forgotten Books.
Smith, A. (1776). An Inquiry into the Nature and Causes of the Wealth of Nations. Edinburgh: Strathan & Cadell.

Please click/tap your browser ‘Back’ button to return to the location navigated from. Alternatively, click/tap the ‘Antique Keyboard’ graphic below to navigate to the British Business Manifesto home page.

To be in touch…